You are here: Home / History of the Leaf Blower
This post may contain affiliate links. I may receive a small commission, at no cost to you, if you make a purchase 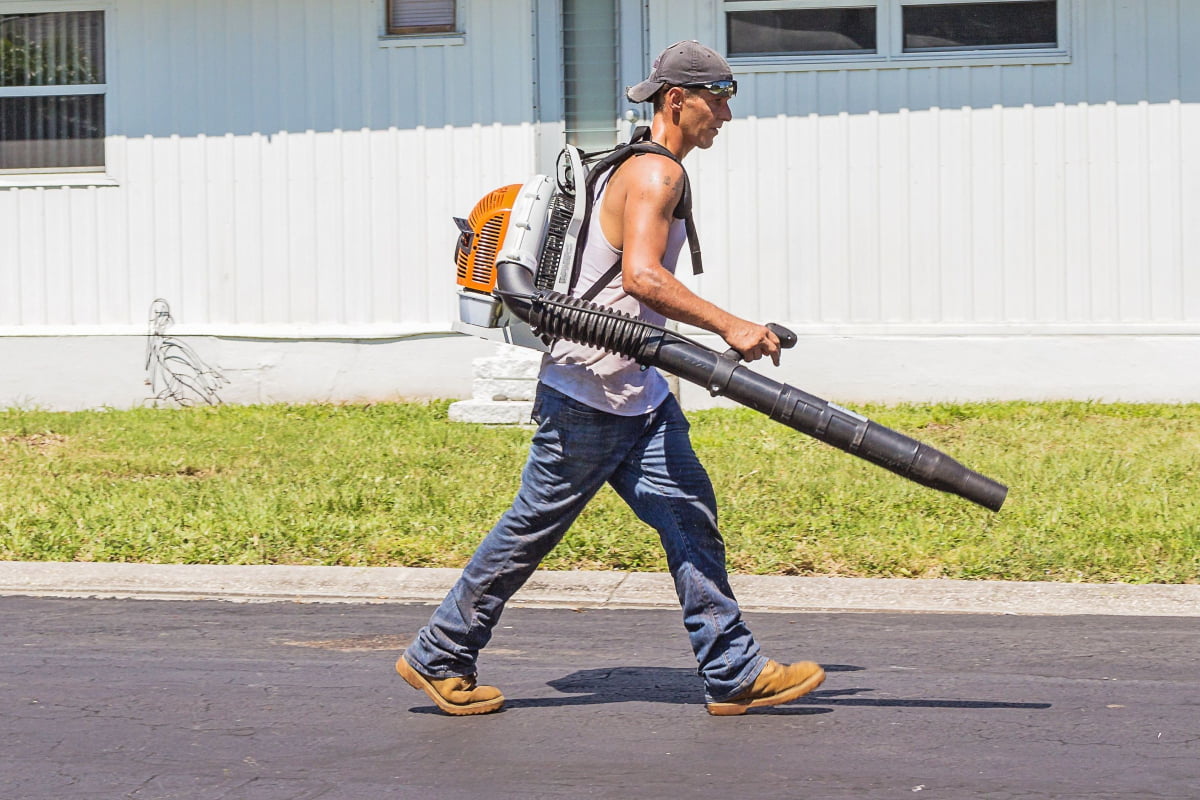 It All Started with a Backpack Crop Duster: Seventy Years of Leaf Blower Innovation

The first leaf blower wasn’t meant to be a leaf blower at all. There is little consensus about where the precursor to the modern leaf blower developed or who invented that machine. But there is agreement on one point: the first leaf blower was a gas powered backpack crop duster, designed to spray pesticides in plant nurseries. Users realized that the powerful sprayer could move leaves and debris, and adapted the units into leaf blowers simply by not adding pesticide to the tanks.

Who invented that first gas powered backpack crop duster? It boils down to two possibilities: the Japanese-based Kyoritsu Noki Company or a Dutch-American named Aldo Vandermolen.

Established in 1947, Kyoritsu Noki released its first product–a backpack power fogger/duster–that same year. The company followed up with the first in a series of backpack blower misting and dusting machines in 1955. But it wasn’t until 1968 that Kyoritsu Noki applied for a patent for a backpack power mist sprayer. Kyoritsu Noki established itself in the United States as the Kioritz Corporation of America in 1972 and changed their name to Echo Inc. in 1978.

Some sources, most notably the Vandermolen Corporation’s website, attribute the invention of the backpack leaf blower to Aldo Vandermolen. Aldo’s 2017 obituary, hosted on the company’s site, states that Aldo “made one of the biggest contributions to the landscaping industry by creating the backpack leaf blower and subsequently, the first handheld gas-powered leaf blower” but does not provide dates. Unfortunately, there are no patent applications from Aldo or the Vandermolen Corporation for a backpack blower, mister, or sprayer, which would verify and date this claim.

While backpack dusters/sprayers were the precursors of today’s handheld leaf blowers, developers of actual leaf blowers focussed on push or “walk behind” wheeled blowers. Unlike early backpack models, the walk behind leaf blowers usually had a vacuum component as well. The first wheeled leaf blower vacuums were designed by H. L. Diehl in 1959, and similar models are still in use today particularly on large properties.

The development and sale of dedicated leaf blowers meant that more people–and, in particular, more private homeowners–were able to purchase and use the machines. As sales of Kyoritsu Noki’s/Echo’s blowers took off, other companies took note. Weed Eater, Stihl, and McCulloch/Husqvarna, among others, began introducing leaf blowers into their product lines in the 1980s.

Consumers were attracted to the technology not just because it made yard work easier, but because it seemed to be the right environmental choice at the time. For instance, during the extreme drought of the mid-1970s in California, homeowners choose to use leaf blowers to clean their patios instead of hosing them down to save water.

Leaf blowers skyrocketed in popularity throughout the 1980s. By 1989, almost one million leaf blowers were sold annually in the United States.

Despite their popularity, within a few years of entering the market, leaf blowers had their detractors. In 1975, Carmel, California banned the use of the machines. They were reacting to the undeniable environmental impact–both regarding noise and emissions–of the early leaf blowers.

The first gas leaf blowers developed were with two-stroke engines. As fortune magazine explains,  engines of this type are “extremely reliable, maneuverable, lightweight, yet powerful, and inexpensive” but they are also “the dirtiest engines on the face of the earth.” Additionally, while blowers emitted the same loud rumbling noise as most other handheld power equipment, the impeller blades in their engine housing also created a distinctive high-pitched whine.

Emissions were the first issue addressed by manufacturers, to comply with regulations that first established in California, and later enforced at the national level. California’s regulations were to be implemented in two progressive stages: the first by 1995 and the second by 1999. Manufacturers easily met the 1995 goal, but the 1999 goal required serious innovation. That innovation resulted in cleaner two-stroke engines as well as the emergence of four-stroke engines in power tools. Concurrent technological advances, such as electric and battery operated blowers, inherently addressed the emissions issue as well.

Echo Inc. met the noise issue head-on. According to Larry Will, who was Vice President of Engineering at Echo at the time, the company redesigned their engines in the mid-1990s so that noise emissions were reduced by a whopping 75%. Since noise was the driving force behind leaf blower bans in many communities, other manufacturers soon followed suit.

The shift to corded electric leaf blowers reduced the noise and emissions issues of the machines considerably. While electric corded blowers were not as powerful as gas powered machines and needed to be in reach of a power outlet, they were still a good choice for many homeowners. As well, their noise emissions complied with most municipal regulations.

As manufacturers increasingly turned to rechargeable lithium-ion batteries to power all kinds of devices, the introduction of battery powered leaf blowers was a logical step. Cordless blowers have been a game changer. They neatly address both noise and air pollution issues. Further, they’re cheaper to operate than gas or electric models and offer more portability than corded electric blowers.

As Popular Mechanics points out, the current generation of battery powered leaf blowers is powerful enough to handle most light- and medium-duty jobs. In an August 2017 review, the magazine rated the Worx Turbine WG591 the best cordless leaf blower. They state that it has an “outstanding power-to-weight ratio combined with a highly productive airstream. We used the Worx to clean up what other blowers left behind.”

Another excellent example is the Ego Power+ LB4803 which outperforms most 40V electric blowers. In a 2014 review on protoolreviews.com, readers were advised to not “ever buy any other handheld blower before checking this one out. Ever. Never ever.”

Newer cordless blowers show potential for outperforming the best gas powered blowers as well. The GreenWorks GBL80300 is touted by this site as the most powerful cordless leaf blower currently available.

The speed and cubic feet per minute of the best battery powered leaf blowers are close to the top levels of gas powered back leaf blowers. Whereas a run-time of 30 to 90 minutes is enough for most homeowners, it is not long enough for commercial use. As battery technology continues to develop, it won’t be long before battery powered units have run-times of 6 hours or more and are convenient replacements for gas powered units in commercial use.

As an Amazon Associate I earn from qualifying purchases.